So yeah, I’m gonna make this a thing like with my Legends of Tomorrow character lists. Honestly, thinking about both of those shows, they are in a way similar to each other, though they do use different methods of storytelling, different formats on which to do them (i.e. YJ is animated and LOT is live-action), and yet they kinda have different yet similar premises to each other, in which both shows are about a wide variety of characters from DC Comics and team up together and go on missions together, difference between em is that YJ is about, as the title suggests, the young characters, while LOT has heroes and villains teaming up together. With both of these shows having these elements, it allows them to incorporate a lot of characters, concepts, and ideas to be put into them, no matter how unlikely or difficult it is, and manages to pull it off well. That being said, there’s still plenty of characters that can be put into the show, regardless of whether they be members of the Team, supporting characters, or antagonists. Here we go:

No, you’re not reading it wrong, I do mean ANY version of Supergirl (though this doesn’t exactly include Power Girl, who is more of her own character than just an alternate Supergirl). Also, you know how the Batman family tends to keep all of its members in it somewhat, with only a few instances of seemingly erasing them from existence and then kinda bringing em back (like with Stephanie Brown and Cassandra Cain)? Well, in the case of the Superman family, there’s a buncha characters they tend to go back and forth of keeping em around, erasing from existence, and then sorta bringing em back (like with the multiple versions of Supergirl).

The Supergirl show has become really popular, and for good reason, though that being said, it’s not the only reason why Supergirl should be on Young Justice. One of the writers of both the Young Justice show and the comic of which it got its name and other elements from, Peter David, also wrote a Supergirl comic in the mid 90s until the early 2000s. I even got to meet him at Awesome Con and when I asked him what his favorite DC comic to work on was, he told me it was Supergirl. It was about the Supergirl of that era, a pink protoplasm named Matrix that came from a pocket universe that takes the form of a female Kryptonian (yeah just go with it), merges with a human girl named Linda Danvers, and together they are a new Supergirl, later on becoming an Earth Angel of Fire (again, just go with it), and then sorta making sporadic appearances because there are people at editorial who want her gone in favor of Kara Zor-El (after she was erased from existence and sorta made sporadic appearances until her “return”) and there are those who want to keep her around. After I read part of the garbage run that was the pre-New 52 Supergirl comic, I started reading the first trade paperback collecting the Peter David series, and it’s probably one of the best comics I’ve ever read.

With that little tangent said, I think that if Supergirl were to be put into Young Justice somehow, it oughta be ANY version of the character, though the way it could be done is if Kara Zor-El is introduced, goes on some missions with the Team, bonds with Superman and Superboy and others, and then later on in an attempt to replicate his success with cloning Superman, Lex Luthor makes the Matrix Supergirl. Matrix sorta becomes an antagonist before realizing what kind of monster Luthor is and goes off on her own, goes on some missions with the team, and then on either a mission or a random happenstance, the 90s Supergirl comic gets incorporated in which she merges with Linda Danvers during a demon ritual, they become a new Supergirl and later the Earth Angel of Fire. I know that sounds convoluted, but so are comics at times, and honestly this wouldn’t be any different than how the show depicted Roy Harper, having him split into two characters, Red Arrow (a clone) and Arsenal (the original). This would allow both versions of Supergirl to exist on the show, that is if Power Girl gets added too and then technically there’d be three Supergirls. And again, Peter David has been involved with all these things, he’s a great writer, so it’d be nice to see another of his ideas be brought to a wider audience

One of the themes in Young Justice is legacy. It’s been addressed in several episodes, or really that’s part of what makes the show so great as a whole. The main characters of the show, whether they be part of the Team or not, usually have to deal with how they are the next generation of heroes or villains, how they live up to their predecessors and honor them somehow, how their parents, be they heroes and/or villains, impacted them growing up, and while also trying to be their own individuals. There have been a bunch of characters that do this and I think an additional character that could further utilize these ideas is Owen Mercer, the second Captain Boomerang. Believe it or not, the original Captain Boomerang, Digger Harkness, had a son with Bart Allen’s (Impulse/KidFlash) mother, somehow, and this results in him being a speedster and the two being half-brothers. Over time, Owen became an antihero, sometimes fighting against heroes, sometimes fighting with them, and even has a “relationship” of sorts with Supergirl. I didn’t like how he got killed in Blackest Night because there was potential in doing more with him, especially since his own father came back to life.

If he were to be put into the show, I think maybe just do him the way other characters similar to him have been done. Like Aqualad, he’s the son of a supervillain, but he’s also related to the Flash family, which would make him more divided on whatever actions he does. Maybe he’ll join the Team, maybe not. Maybe he’ll have a “relationship” with Supergirl. Maybe he’ll bond with his half-brother Bart Allen. Who knows. There’s lots of ideas to do with a character like this, and with the show’s history, they’re pretty damn good at doing it.

I thought about putting him on the first list, but decided not to. Like other characters on other lists I’ve done that have been getting attention in adaptations lately, Cyborg has been used in a lot of em, though this can be as far back as the Superfriends shows in the 80s, not just Teen Titans, the Justice League animated movies, the DC Extended Universe, and even [gag reflex] Teen Titans GO!. Khary Payton, who’s also the voice of Aqualad, is the one most well-known for voicing Cyborg in several mediums, but in the case of YJ, he could do it here, yet I also think someone could also do it too, just to provide a different feel.

Honestly, I’m not sure what would be the best way to include him on YJ. He could be a member of the Team, the Justice League, or his own hero. I don’t think he should just be included for the sake of it, because of recent adaptations he’s in, or that he’s been shoehorned in as a “founding member” of the Justice League. As long as the spirit of the character is kept intact, which the show does well at with a lot of characters, then I guess anything can work. Just as long as they don’t do ANYTHING that resembles Teen Titans GO!, for the love of all things decent.

There have been Green Lanterns on the show before, such as Hal Jordan, John Stewart, Guy Gardner, and I think even Alan Scott had a cameo. The Guardians of the Universe (more like the Cosmic Pricks of the Universe) have been referenced. But there’s never been a Green Lantern that was a main character on the show, not that there would need to be since the characters are already great, but it would be nice to see. Who better for that than Kyle Rayner? He was created in order to appeal to new and younger readers at a time when Hal Jordan was kinda slagging, which resulted in him being turned into a villain called Parallax, dying and turning into The Spectre, and then becoming Green Lantern again when GL stuff was starting to wane. Despite this, Kyle is still a popular character and continues to be featured to this day, even becoming a White Lantern. He’s also gone through various outfits, his 90s one being my favorite and even have an action figure of (I also used to think that was Hal Jordan until finding out otherwise), and it’d be cool if that outfit was used on the show if he’s ever added.

Because of the youthful appeal of the show, Kyle Rayner would be perfect in order to include more Green Lantern elements. Like other characters, he has the weight of a legacy on him while also trying to be his own person, yet still manages to be a great hero in his own right. I don’t know if the whole Hal Jordan becoming Parallax could be utilized as well, but again, the show has managed to work in various stories from the comics before, so who knows. I also don’t know if it’d be a good idea for the show could to depict his girlfriend Alexandra DeWitt, whose death was caused by Major Force, being strangled and stuffed in a fridge, coining the term “Women in Refrigerators Syndrome”. That’d be too dark for even Young Justice to do. Still, him being included would fit with what his original concept was and the idea of the show as a whole, and since Kyle is an artist and is able to make pretty interesting constructs with whatever ring he uses, it’d make for some great visuals on the show, as has been done whenever anything GL-related is used in an adaptation.

This guy has been used in A LOT of adaptations, from Superfriends to the DC Animated Universe to even friggin Arrow, though that one wasn’t quite like the one traditionally portrayed in comics and it’s yet to be seen if there ever will be in the Arrowverse or other universes alongside it, though I’ve heard he will be featured in Gotham at some point. Still, I was surprised Solomon Grundy hasn’t been used in Young Justice and he’d be perfect for it. I mean, he’s a friggin zombie supervillain, how could that not be cool to have? Regardless of how he’s depicted, I like this character, whether he be the “zombie Hulk” as he’s traditionally portrayed or the New 52 Earth 2 version in which he’s the avatar of The Grey, all dead life, and is more of a demonic force.

Given how I mentioned Anton Arcane in my previous list and that the show could adapt “Rotworld” for a future season, I think that’s where Solomon Grundy could fit in. His origin would be the same, a criminal named Cyrus Gold who got killed and resurrected by a mystical swamp, but his Solomon Grundy form would be a mix of his pre-Flashpoint and New 52 iterations, in which he’s a hulking monster with demonic powers that’s a servant of The Grey and is Anton Arcane’s second-in-command/muscle. It wouldn’t be that much different than how season 2 depicted Black Beetle being the muscle of The Reach, yet still interesting to see.

So there’s my second list of characters for Young Justice. Do you agree/disagree with this list? Who would you like to see appear on the show? Drop a comment and let me know. Thanks for reading! 🙂 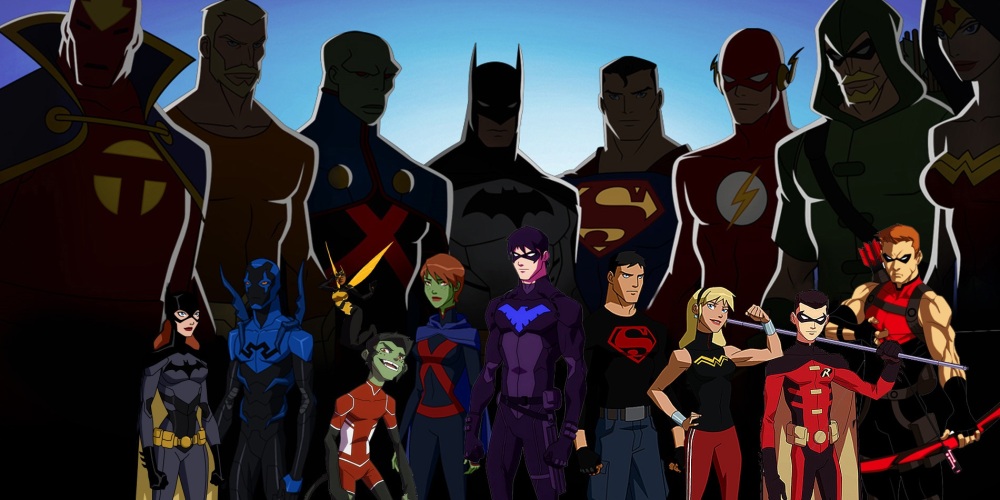